The History of the Spread of Spiritual Daoism Outside of China 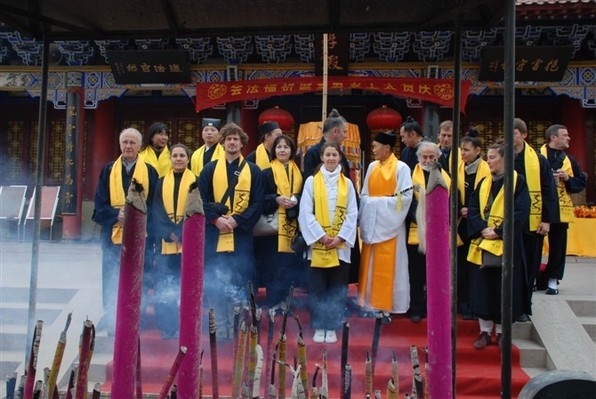 During the Wei and Jin, and Northern and Southern Dynasties Period (220-589 CE), Spiritual Daoism spread to Vietnam and influenced the development of its culture and scholarship. In fact, it is true to say that Daoist philosophy subtly and profoundly influenced the entire foundation of traditional Vietnamese thinking. During the Tang Dynasty (618–907), Spiritual Daoism spread from China into the North Korean area, where it attracted a large number of practitioners. At the same time, the philosophy of Daoism had a profound effect upon the development of traditional Korean medicine after it spread into the Southern Korean area. Within Korea, a Classic book was compiled entitled ‘Spiritual Daoism – Philosophical Daoism’ (道教、道家 – Dao Jiao – Dao Jia), which covered the subjects of training the mind and body to build health and prolong life expectancy, as well as explaining yin and yang methodology, medicine, and other profound subjects.

Within the country of Japan, Spiritual Daoism has had a long presence and history, dating to around the Qin Dynasty (221-206 BCE). Prior to this time in China, the Daoist principle of ‘Immortality’ (仙 – Xian) as well as a ‘transformative’ meditational practice (performed deep in the mountains had been developed and codified), together with a Daoist medicinal system premised upon the careful cultivation of mountain herbs. This communing with nature led to a number of Daoists traversing the great seas that surround China, and traveling to Japan. One such adventurer was the Daoist wizard (方士 – Fang Shi) named ‘Xu Fu’ (徐福), who set sail on a fleet of ships carrying 3000 boys and 3000 girls (around 210 BCE). Today, the tomb of Xu Fu can be seen in modern Japan, together with a Xu Fu Memorial Hall, and other Chinese relics. The idea of venerating the ‘Dao’ (道) permeates all the way through traditional Japanese culture, and can be seen in the martial arts of ‘Judo’ (Rou Dao - 柔道) – ‘Gentle Way’, ‘Karate-do’ (空手道 – Kong Shou Dao) – ‘Empty Hand Way’, and the martial code of ‘Bushido’ (武士道 – Wu Shi Dao) – ‘Way of the Warrior’, etc.

For over a century, Western countries have been actively engaged in attempting to understand Chinese culture to a greater degree. This effort has led to the translation of Chinese Daoist Classical texts into English (and other languages), and the publication and circulation of academic papers further exploring Daoist principles and practice. This has led to an improved understanding in the West of Spiritual and Philosophical Daoism, thus adding to the cultural impact of this mode of thought and action. A foundational aspect of this transmission from China to the West has been the work of ‘Laozi’ (老子), where there has been at least 220 translated versions into foreign languages, together with at least 20 different commentaries. This popularity outside of China, demonstrates the timeless and universal nature of the Daoist philosophy developed by Laozi, a very long time ago.

Within France there has been a strong intellectual interest in Daoist thought and practice. Much of this has historically stemmed from many foreigners spending years living in China, and demonstrating a genuine interest in Chinese culture. This presence has been augmented by Chinese people living in France, and offering instruction, guidance and clarification regarding Daoist methodology, whenever and wherever such interaction has been appropriate and required. In this way a genuine understanding of the Chinese Daoist thought has been developed.

Of course, Russia is a country adjacent to China, and cultural exchanges have had a very long history. In the early days, it was Christian missionaries (representing the Russian Eastern Orthodox Church) that first came into contact with Chinese Daoism. However, following the October Revolution of 1917 in Russia, the study of Chinese Daoism in that country was elevated to that of a ‘science’, when Daoism was recognised as a legitimate path of philosophical enquiry, when it was formally registered with the Ministry of Justice (thereby ‘legally’ protecting it under Soviet law). This is how Chinese Daoism was recognised as a ‘science’ and not as a ‘superstition’ in Revolutionary Russia.

As Chinese people have spread all-over the world, Chinese culture has spread with them. This is how Chinese Daoism has spread to Europe and the United States, although in the early days, the Chinese diaspora was more focused upon private practice of Buddhism, Daoism and Confucianism (i.e. ‘ancestral worship’) around family shrines, with occasional Buddhist temples or cultural study centres being developed. However, in recent times, Daoist temples (or study groups) have been developed and built in the West that are designed to ‘share’ Daoist teachings in a universal and inclusive manner. This has been particularly true in the UK, Canada and the United States, where Daoist educational centres catering to Chinese cultural needs, also reach-out to the general population.

As contemporary China continues to develop and flourish, many Daoist temples have forged links with foreign Daoist groups, and operate regular exchange visits and education exchanges. Many foreigners travel to China to gain a more in-depth understanding of Daoist practice, and quite often Chinese Daoist experts travel abroad to render assistance through lectures and practical advice. Every year, many foreign Daoists visit Longhu (龙虎) Mountain situated in Jiangxi province, to receive Daoist instruction and talismanic empowerment. In fact, many domestic and foreign Daoist groups are members of the International Spiritual Daoist Study Forum (国际道教论坛 – Guo Ji Dao Jiao Lun Tan) which co-ordinates these exchanges. The spread of Daoism around the world has been successful because its teachings do not discriminate, are compassionate, wise and open to all without exception.