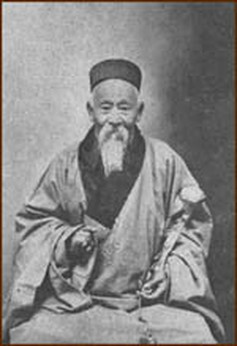 Master Liu Mingrui
Translators Note:  Daoist Master Liu Mingrui (1839—1933) one of the pivotal teachers of Zhao Bichen (1860-1942) – the latter being the founder of Qianfeng Daoism. Indeed, when still a child, Zhao Bichen suffered much illness and his mother – hearing of the healing reputation of Liu Mingrui – took her son to see him. During their time together, Liu cured Zhao and took him as a disciple – imparting the fundamentals of the Namo School of Daoist philosophy and practice to him (which originated from the Wu Liu School). Although Zhao Bichen would go on and train with many other Daoist masters – he never forgot the debt of gratitude he owed Liu Mingrui, despite the fact that Liu emphasised monastic practice, whilst Zhao Bichen would marry and teach all without exception.  Zhao Bichen learned the Wu Liu teachings through the Namo School (although he did not receive 'formal' transmission within this school) – and also through his Ch’an Buddhist (and Daoist) masters Liao Ran and Liao Kong (from whom he did receive 'formal' transmission).
ACW 28.3.2016

Wu Shouyang (伍守阳) {1565 – 1644} was the 8th generation Inheritor of the Dragon Gate (龙门 – Long Men) Daoist tradition.  He received transmission from Cao Huanyang (曹还阳), and instruction from Li Niwan (李泥丸) and Wang Chongyue (王常月).  Liu Huayang (b. 1736-?) according to the text entitled ‘Golden All-embracing Mind Lamp’, was formerly a Ch’an Buddhist monk before he intuitively inherited (or became a ‘vehicle’ for) the true teachings of Wu Shouyang.  He then wrote the text entitled ‘Wisdom Life Classic’ (慧命经 - Hui Ming Jing) as a means to convey his understanding.  However, the ‘Wisdom Life Classic’ is very similar to the work of another prominent disciple of Wu Shouyang named Xie Nengshu (谢凝素) who wrote a text entitled ‘Golden Immortal Certification Treatise’ (金仙证论 – Jin Xian Zheng Lun).  It is assumed by some that Liu Huayang may have copied from Xie Nengshu’s work in his ‘Wisdom Life Classic’.  The Wu Liu School is also referred to as the Northern School of Self-Cultivation Law (丹法 – Dan Fa), but its teaching method differs from that of the ‘Complete Reality’ (全真 – Quan Zhen) from which it evolved (through the Longmen Branch).  Due to its diverse approach, the Wu Liu School has produced many eminent scholars and has had a great influence on the development of Daoism.  One such scholar was named Liu Mingrui (刘名瑞) who was the 20th generation lineage inheritor of the Namo School (南无派 – Na Mo Pai) method of Daoist self-cultivation (Dan Fa) – a branch of the Complete Reality (Quanzhen).  The Wu Liu School has had a tremendous influence and its self-cultivation (Dan Fa) has spread far and wide due to its popularity.

伍守阳为龙门第八代宗师，得曹还阳之传，又师事李泥丸、王常月；柳华阳据《金盖心灯》载，原为僧人，自称得伍守阳真传，著有《慧命经》。但他所著的《慧命经》，与伍守阳高徒谢凝素的《金仙证论》、《慧命经》大同小异，显然有抄袭谢凝素之作的嫌疑。该派本为北宗所传，惟其在丹法理论上与北宗全真又有所不同，后世学者很多，门庭颇盛，影响甚大，如全真南无派第二十代宗师刘名瑞的丹法等，就深受伍柳派影响，也是流传至今的丹法之一。
©opyright: Site design, layout & content Qianfeng Daoism (UK)  (2014).  No part of this site (or information contained herein) may be copied, reproduced, duplicated, or otherwise distributed without prior written permission from qianfengdaoismuk@f-m.fm