The Science of Vegetarianism & Veganism 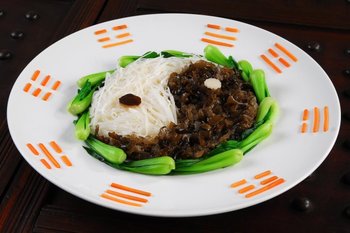 The Taoist Yoga Manual (translated by Charles Luk) does not appear to state anything specific about diet (even though it is well known that Qianfeng Daoism does advocate the following of a vegetarian diet).  From the very beginning the requirement (and emphasis) of the manual appears to mirror Ch'an - with the practitioner putting the body in order so as to be able to 'sit' effectively and leave the body behind. As Zhao Bichen's Wu Liu Daoist Masters were both ordained Ch'an Buddhist monks (i.e. Liao Kong and Liao Ren) it would have been taken for granted that both were celibate and followed a vegetarian diet (probably vegan).  Therefore when putting the body in order to sit correctly (assumed to have been accomplished prior to the commencing of the instruction found in the manual), this would imply a pure diet and no sexual activity.  For Ch'an Buddhist monastics this is easy because it is the basis of the Buddha's Vinaya Discipline in China, but for ordinary people this will be a challenge as lay society routinely seeks pleasure through sexuality and food intake.  The Daoist interpretation of this is that sexuality should be 'regulated' to prevent wastage of essential nature (jing), but as Zhao Bichen sired a child when in his sixties - it is obvious that the Daoist view is not one of complete or permanent celibacy.

Diet is an interesting issue for many people because food is inherently linked to psycho-physical conditioning.  Of course, if given no choice, the mind and body adjusts to new conditions, but even if this discipline (and perspective) is applied, medical realities should not be ignored.  If in trying to gain a longer life and better health, existing medical conditions are ignored, then obviously this could lead to more problems and actually negate any possibility of progress.  This is why modern medical advice should be sought if the body responds in an undue 'negative' manner to various training methods.  Common sense should be applied with regards to nutrition, and the appropriate intake of vitamins and minerals.  This is because Qianfeng Daoism is modern and not anti-medical, as Zhao Bichen, although training within a firm traditional (Longmen) Daoist manner, was encouraged by his Ch'an Buddhist Masters to de-mystify the tradition, modernise it, and make it available to the general public.  In this regard, Zhao Bichen made the effort to study the Western science of anatomy and physiology - which he then expertly weaved into the narrative of his manual.  Meat-eating certainly has many negative issues of health surrounding its consumption, many of which are scientific and not just moral in nature.

Meat is assumed to be a corrupting influence within Chinese medicine and Daoist understanding - even in old China where animals were not produced through industrialised farming.  This means that meat which is free of anti-biotics, growth hormones, preservatives, artificial colouring, and chemicals induced within the animal through poor and brutal living conditions and barbaric slaughtering methods, is still not considered good to eat.  If this is the case, then the eating of meat (that contains all these negative additives) in the modern age must be considered medically disastrous for the health of the human body and mind. This is in addition to the farming industry that justifies meat-eating by stating that people cannot live without the protein meat provides.  Obviously this is scientifically untrue as an equally suitable protein can be obtained from many other vegetable-based sources. However, when a diet is suddenly changed (even those that still include meat) many experience a very real sense of physical weakness and psychological negativity.  This appears to be the evolutionary response genetically programmed into human beings to ensure their survival through constantly striving to gain appropriate amounts (and types) of food is maintained.  This conditionality stems from a time when food was scarce.  In the more economically affluent areas of the world today there is an abundance of food - but in the underdeveloped areas food can still be insufficient.  As Daoism strives to balance the body and environment, it is only logical for the balance of the world that dietary discipline is practised. If there are any medical issues either pre-existing or arising from following a vegetarian diet, then these must be medically addressed before advancing further.  If there are no medical issues, then the apparent discomfort when switching to a vegetarian diet will soon vanish as the body adjusts to a new regime that will soon become 'normal'.