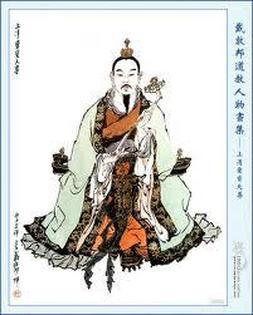 Translator’s Note:  This is an English translation of a concise Chinese language biography of Daoist Master Wu Shouyang (aka Wu Chongxu) who was purported to have died whilst in seated meditation in 1644.  However, at that time his body was reported to have ‘disappeared’.  This has far-reaching implications, because 136 years later (in 1780) he seems to have bodily appeared to Master Liu Huayang and transmitted his Daoist lineage to him.  These incidences explain the convention of Chinese texts to talk routinely of Master Wu Shouyang teaching Liu Huayang despite the years between them.  Not only this, but Wu Shouyang is said to have received instruction from Wu Chongyang who is believed to have died in 1170 – some 474 years prior to Wu Shouyang’s birth.  My view is that this is a matter of meditational attainment not easily understood by those who have not yet experienced its reality.  Wu Shouyang taught that the underlying essence of Buddhism, Confucianism and Daoism was exactly the same, but understood that the three paths had outwardly distinct and different approaches that could be reconciled through a Daoist perspective.
ACW 30.3.2016

Wu Shouyang (1574-1644) lived during the latter Ming Dynasty period and was from the Jian (吉安) area of Jiangxi province.  He was formerly known as ‘Yang’ (阳), ‘Absolute Yang’ (端阳 – Duan Yang), and ‘Soar Void Disciple’ (冲虚子 – Chong Xu Zi).  According to the text entitled ‘Immortals and Buddhas Ancestral Collected Sayings Record – Five Truly Virtuous Beings Song’, Wu Shouyang is described as being born with extraordinary intelligence.  When he was 10 years old, he made a determined decision to study the ‘Classics’ (经 – Jing).  At the age of 13 years old, he entered the Daoist priesthood (入道 – Ru Dao) to train his mind (and body) to realise the truth of existence.  At 16 years of age, he passed the imperial examination and became a government official – but he soon tired of this life.  When he was 19 years old (during the 21st year of the reign of the Ming Dynasty Emperor Wan Li – or 1593) he inherited the linage of Cao Huanyang (曹还阳) who transmitted the ‘Lower Energy Centre Self-cultivation Law’ (丹法 – Dan Fa).  By the age of 20 years old, Wu Shouyang gave-up the worldly life and abandoned Confucianism completely to the study of Dao.  He received (spiritual) instruction in the Dao (道) from the founder of the Quanzhen School – Wang Chongyang (王重阳).  He read the books about the Immortal Sages (仙圣 – Xian Sheng) and contemplated the true meaning of reality.  The texts he authored and transmitted include the 'Divine-Sky Immortal Correct Principle’ (天仙正理 – Xian Tian Zheng Li), (天仙正理 – Xian Tian Zheng Li), and the ‘Immortal Buddha Integrated Lineage’ (仙佛合宗 – Xian Fu He Zong).  He then studied under Masters Li Niwan (李泥丸) and Wang Kunyang (王昆阳), and eventually inherited the lineage of the Dragon Gate School (龙门派 – Long Men Pai).

伍守阳（1574——1644），明朝末年江西吉安人。原名阳，字端阳，号冲虚子。按《仙佛合宗语录·伍真人修真歌》记述，生而聪颖超常，十岁即奋志经学，遂得王重阳道言七篇；十三岁即生求真入道之心；十六岁即可披阅文章，并对习儒进仕感到厌倦。自二十岁断除名利，彻底弃儒从道。他十九岁时（即明万历二十一年，时1593）得曹还阳亲传丹法，遂遍阅仙圣之书，又参悟真谛，始著《天仙正理》与《仙佛合宗》，后又师事李泥丸，王昆阳，为龙门派传人。
©opyright: Site design, layout & content Qianfeng Daoism (UK)  (2014).  No part of this site (or information contained herein) may be copied, reproduced, duplicated, or otherwise distributed without prior written permission from qianfengdaoismuk@f-m.fm