When combined in this medicalised context, the ideograms ‘小周天’ can be taken to read as ‘Small Divine-Sky Circulation’.  It can also be read less cryptically as ‘Minor Circulation of Nature.’  The Christian term ‘heaven’, although often used in translation, is not applicable because a Christian heaven is only attainable after death, whilst Chinese medicine teaches that the ‘divine’, although in the ‘sky’, is also immediately present, integrated with every living thing on earth.  All beings that are ‘alive’ are imbued with the spirit (神) of nature here and now, in this very incarnation.  This type of ‘divinity’ is earned within Daoist practice, by a constant and dedicated personal effort in self-cultivation, and is not bestowed by an outside force.  Tian is in fact an ‘indifferent’ and ‘disinterested’, but all pervading entity, that although essentially ‘empty’, contains all things without paradox or contradiction.  Qi energy and essential nature (精 – Jing) are gathered, condensed and circulated through the ‘Microcosmic Orbit’, which is an area technically limited to the torso of the human body, and focused specifically upon the Governing Vessel (督脈 – Du Mai) - which travels from the base of the spine, up the spinal column to the top of the centre of the head and down the centre of the face to the top lip – and the Conception Vessel (任脈 – Ren Mai) which runs from lower lip area of the face and travels down along the centre of the front of the body, through and under the groin, terminating at the base of the spine (these two vessels are connected by the tongue touching the palate of the roof of the mouth).  These two qi energy channels form an ‘orbit’, or ‘circulation’ that does not include the rest of the body when the concentration of the mind is fixed upon channelling qi energy and essential nature (jing) around this area.  As the rest of the body (i.e. the arm and leg areas) remain ‘outside’ of this concentrated circulation, it is medically referred to as a ‘minor’ or ‘small’ circulation.  However, within this context, this does not mean ‘subordinate; or ‘less important’, on the contrary, this ‘small’ circulation is the foundation and essence not only of life itself, but of all Daoist self-cultivation.  This circulation is only ‘small’ in area, but enormous in profound meaning: 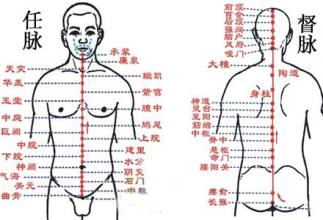 This circulation includes the qi energy channels that travel through the rest of the torso (existing outside of the microcosmic orbit) and into the full extent of the arms and legs.  Through meditative concentration, the microcosmic and macrocosmic orbits can be distinguished and focused upon separately.  This has the effect of ‘intensifying’ the circulation of qi energy and vital force (or enhanced qi energy integrated with essential nature) travelling through these channels.  In the case of neidan (內丹) or ‘internal self-cultivation’ as found within Daoist practice, the microcosmic circulation is strengthened and developed before the mind expands its awareness to extend this benefit into the broader energy circulation.  However, even if the mind has its awareness fixed on the micro or the macro circulation at anyone time, this does not mean the qi energy is not flowing elsewhere in the body.  On the contrary, regardless of meditative specialisation, qi energy and essential nature (jing) are always circulating through a living body.  Focusing the mind simply brings a developmental mechanism (combined with correct breathing), to bear upon a particular part of the bodily flow of energy.  Within the practice of Taijiquan (太極拳), for instance, the mind can be fixed on either the micro or macro energy flow, but more often than not, the practitioner focuses on both simultaneously.  The point is to saturate the body with positive energy and to keep the circulation both strong and even.  Many Daoists practice neidan in a seated fashion – developing the micro and macro circulations – before applying these developments to the rigours of standing meditation (站桩 – Zhan Zhuang) and the movements of martial arts.  Once the inner organs of the torso have been strengthened through micro orbit cultivation, this benefit is then extended to the arms and legs of the macro circulation.  This demonstrates that the micro circulation is primary, and that the macro circulation is secondary, when examined using this model of interpretation: