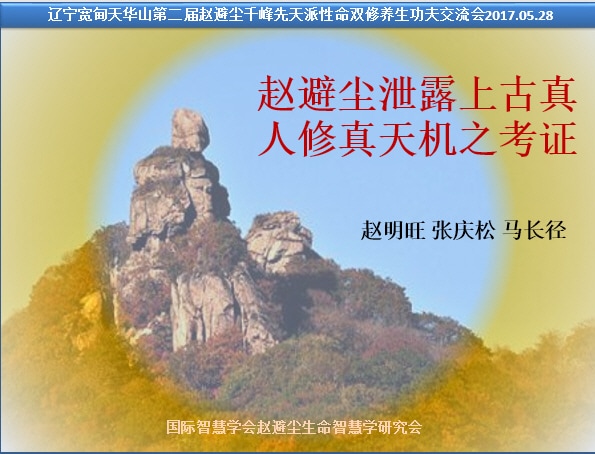 Translator’s Note: Recently, the eminent academic and Qianfeng Daoist authority – Dr Zhang Qingsong (张庆松) – requested that I present a short over-view (in English translation), of his current research paper entitled ‘赵避尘泄露上古真人修真天机之考证‘, or ‘Contextual Research: Zhao Bichen’s Disclosure of Secret Ancient Daoist Wisdom - Designed to Cultivate True Virtue and Wisdom’, written in collaboration with Master Zhao Mingwang (赵明旺) and Ma Zhangjing (马长径), as part of an ongoing project examining the genesis, evolution and affect-effect of the agency of wisdom throughout the development of all human societies. Obviously, what follows is not the entire paper, but rather a condensed presentation designed to introduce the general reader (and expert alike) to this fascinating subject.
ACW 27.6.2017

How old is the authentic Daoist tradition? Can its origins be traced to the Han Dynasty (202BC-220AD) or the Tang Dynasty (618-907AD)? Could recognisable Daoist teachings predate the Qin Dynasty (221-207BC), and perhaps be part of the earliest Confucian School? Are the Daoist teachings even older than Confucianism, and have their roots in pre-Confucian shamanic practises? Zhao Bichen inherited his authentic Daoist teachings through the Longmen School – in the traditional manner of ‘closed’ lineages, but in 1928 decided to abandon this methodology and instead embrace the principle of teaching anyone and everyone who came for instruction. Why did Zhao Bichen take this unusual position? What motivated him to discard the strict tradition within which he had been trained, and to establish an ‘open’ lineage as the foundation to his Qianfeng School? This paper examines the proposition that although Zhao Bichen ‘revolutionised’ Daoist teaching practises for the age within which he lived, nevertheless, there may well be evidence throughout the history of Daoism, that in fact it was not uncommon for ancient sages to act out of compassion and teach various individuals, despite the fact the methodology of ‘closed’ lineages was still very much the traditional (and for many the ‘preferred’)  model of transmitting Daoist technical knowledge and wisdom. If this is correct, then the implications for the ‘modern’ Qianfeng School are obvious in that it has managed to not only preserve the ancient teachings, but has also brought-out an old teaching method as if it were new.

This paper then, examines three propositions:

1) Authentic Daoist teachings are demonstrably ‘ancient’.
2) The ‘core’ of this authentic body of Daoist knowledge was legitimately inherited by Zhao Bichen.
3) By ‘modernising’ the ‘closed’ Daoist teaching method into one of ‘openness’, Zhao Bichen was in fact, acting out of a profound knowledge and respect for the past, and not departing from it.

The evidence for the existence of Daoist teachings in ancient China is drawn from such books as the Yellow Emperor’s ‘Huangdineijing’ (黄帝内经), Laozi’s ‘Daodejing’ (道德經), the Leizi (列子) dating to the Warring States Period (475-221BC), as well as characters such as Zhao Xiangzi (趙襄子) who lived around 425 BCE. References are also made to early (pre-Qin Dynasty) Confucianism, and the influence of Buddhism in China from the latter Han onwards. As the works of the Yellow Emperor and Laozi combined to form the ancient Huanglao School (黄老之学 – Huang Lao Zhi Xue), it can be confidently stated that ‘ancient perfected beings’ (上古真人 – Shang Gu Zhen Ren) did exist in China a long-time ago, and assisted in the development of Daoist understanding and practice. This in-turn led to the establishment of a Daoist Canon and the notion of ‘orthodoxy’. However, by the time of the Republic of China, the young people of China had begun to communicate Daoist methodology using vernacular terms and expressions. This signified a movement away from the hitherto ‘obscure’ language often used within Daoist lineages as a means to ‘protect’ what was considered technical secrets. This is where the genius of Zhao Bichen came into play, as he produced a manual (known in the West as ‘Taoist Yoga’ after Charles Luk’s English translation) that communicated the authentic Daoist path (premised upon ancient sources) that was written in a straightforward language that anyone could understand. This is how the Qianfeng School became accepted (along-side around 80 other lineages) as an authentic Daoist school – and the only genuinely ‘new’ Daoist school to be developed after the Qing Dynasty(1644-1912AD).

Despite this clarification of ‘neidan’ self-cultivation, many people find this text difficult to comprehend because they have not yet managed to disengage their mind’s attachment from the mundane activities of the world. This where an indepth and intimate knowledge of the authentic Daoist path is required for successful self-cultivation. However, Zhao Bichen’s achievement sent shock-waves though the Daoist world, causing people to examine the various Daoist lineages so as to assess their authenticity and efficacy. As Zhao Bichen used a ‘modern’ and ‘logical’ approach to presenting ancient Daoist teachings, this method of ‘scientific’ assessment of Daoist techniques can continue to be used to ascertain the ‘effective’ from the ‘superstitious’ – thus continuing the practice of ‘perfecting’ Daoist methodology to a greater degree. Of course, Zhao Bichen’s approach is designed to facilitate not only numerous students, but also many lineages, all progressing along specific developmental trajectories. What this suggests, is the making public of what was once considered secret with regard to circulating, perfecting, integrating and transcending essential nature (精 – Jing), vital energy (氣 – Qi) and empty spirit (神 – Shen), is an important part of continuing to develop a scientific approach to Daoist practice, that moves toward objective fact and away from outdated or outmoded forms of cultural expression. This is the ongoing and dynamic process that Zhao Bichen set in motion when he first wrote his ‘modern’ Daoist manual (i.e. ‘Xingming fajue mingzhi (性命法訣明旨), or 'The Secret Cultivation of Essential Nature and Eternal Life’).

This paper addresses the interesting question as to why it was that Zhao Kuiyi (赵魁一) – the brother of Zhao Bichen – did not make the Daoist secrets public, but Zhao Bichen did. The authentic Daoist path is reliant upon the generation of ‘virtue’ (德 – De) secured through selfless action, and a profound sense of ‘destiny’ or ‘divine life path’ (天命 – Tian Ming). Zhao Kuiyi was definitely virtuous, but it was not his destiny to change the direction of the Daoist path from ‘secret’ to ‘open’, when for Zhao Bichen it obviously was. This was not a simple undertaking, as at the time such a transformation went against the tide of tradition and involved many risks and dangers. However, Zhao Bichen possessed a mind (and heart) that was broad and infinite, and it was a combination of these attributes that made him ‘divinely’ suitable to this task. He was able to bridge ancient tradition with modern requirements, and bring an old teaching into the contemporary world in such a manner that did not insult or contradict the ancestors. In so doing, he was also able to clearly define proper breathing, proper mediation posture and technique, proper concentration, proper diet, proper discipline, proper circulation of jing and qi, and the proper expansion of shen, as well as teach how to correctly open the eight energy channels and understand every aspect of the genuine Daoist law. By making the Daoist law public, Zhao Bichen also made it clearer. Although of the (Quanzhen) Longmen tradition, Zhao Bichen inherited this system through the Wu Liu (伍柳) School – which possessed a very important manual concerned with ‘stilling’ the mind. It is from stilling an expanding the mind that the Qianfeng practitioner embarks upon the path of Daoist self-cultivation that builds robust health and pro-longs life. This article addresses the technical aspects of Zhao Bichen’s manual in detail, expressing the extent and scope of its content, and demonstrating its comprehensive nature and logical construction.