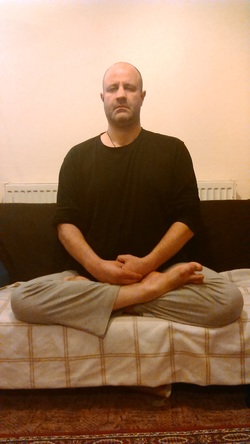 Combined Hand Position Embracing the Lower Dan Tian
In the Chinese language texts, the hand positions for Qianfeng Daoist meditation is often simply described as ‘手掐子午’ which can be translated as:

The phrase ‘手掐子午’ simply translates as ‘Close the meridians of the hands’, which in and of itself, tells use very little about the practice itself. This is typical of the Chinese Daoist tradition which requires a careful instruction received from a qualified master. The hand positions look like this:
Together with the crossed-legs, the Yin and Yang energy in the body is united and correctly channelled in both the arms and legs, as well as the torso, etc. Although the leg positions are similar to those found in Buddhist meditation, (in fact, Grand Master Zhao Bichen [1860-1942] was quite liberal regarding leg placement), the hand positions are very different and should be carefully studied.