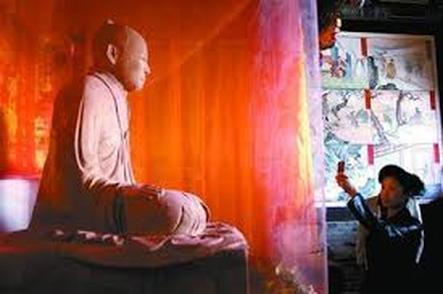 A newspaper in Yan’an has reported that the 400 year old, and perfectly preserved body of a Daoist priest, has been discovered (sat in the crossed-legged meditation position) in a grotto on the summit of Matou Mountain, which is situated in the Ziwuling area of Zhidan County, Shaanxi province.  As the body was preserved using clay, the local villagers referred to it as the ‘Seated Transformation Goddess’.  This was before the outer layer of clay was damaged and the real body was revealed.  Yesterday (18.10.2009), the mummified body was taken to a Daoist temple situated in the National Park on Matou Mountain, where the preserving outer layer of clay was respectfully, and carefully removed from the body.  This investigation revealed what is certainly the body of a male Daoist priest who had ‘transformed through sitting’ whilst experiencing the death process.  Matou Mountain is located 40km southeast of Zhidan County, in an area of very old natural forest and lush vegetation.  Around 2000 years ago, the Qin Dynastic engineers built straight roads through the region, and ancient stone tablets, tiles and architectural ruins can be found all over the mountain.  Tong Bo Shu Village is not far from these ancient ruins.  Locals refer to this place as the Luan Shi (i.e. ‘Broken Stone’) Cliff, and there has been for some time a legend that a ‘Seated Transformation Goddess’ – with her hair held in a bun by a comb and wearing exquisite clothing – resided in one of the caves on the mountain.

According to the person in charge of Matou Mountain tourism, development and construction (named Mi Yu Jin), the Yan’an Prefecture Records state that the ‘Xuan Tien Shangdi Daoist Temple’ used to be found in the area.  It was established during the Song Dynasty under the Emperor Huizong during the second year of the Xuan He Era (1120 CE), and was extensively expanded during the Ming and Qing Dynasties.  In 1972, Beijing Community Youth workers were clearing areas of the forest on Matou Mountain under the supervision of park rangers, when they discovered the body of the Daoist priest sat in the meditation posture.  In 2005, Su Yu Cheng and son – Yu Su Ping – both Zhidan County Museum cadres, hiked into the mountains on four occasions to study the body of the Daoist priest who had died sitting-up in meditation. After this research brought publicity to the find, the local government became involved and resources were allocated.  On June 29th, 2009, over 30 experts and scholars were invited from all over the country to Zhidan County to examine the find.  They all agreed that this was a rare find of a body of a Daoist priest, who had ‘transformed whilst meditating’, before his dead body was then encased in clay in an attempt to preserve it.  The radiocarbon dating suggests an age originating in the latter Ming or early Qing Dynasties.  The man appears to have been a Daoist of considerable attainment, who possessed the advanced ability to end his life using the practice of ‘transformation through meditation’.  Due to his particular Daoist style of headdress and clothing – local villages mistook him for a woman and referred to him as a ‘Seated Transformation Goddess’.

The height of the mummified body is 0.85m, its torso is 0.45m wide, whilst the crossed-legs measure 0.93m across.  The stone platform measured 0.4m long.  When the clay outer covering was broken, the human bones could be seen (through breakages in the skin) as being fundamentally intact.  The bones of the skeleton were white, and the bone structure retained its integrity and resilience.  There was a layer of skin covered by mud, grains and straw, but its structure was both tough and pliable.  As a means to protect the clay-covered mummified body, in 2005, the Zhidan County authorities established the Matou Shan Daoist Temple – Site Protection and Management Committee.  Experts from the Xi’an Heritage Restoration Centre were requested to assist in this project.  On this site is the new ‘Xuan Tien Shangdi Daoist Temple’, the ‘Zhen Shen Zuo Hua Temple’ (or the ‘Pure Body Sitting Transformation Temple’), and five other buildings.  A new Zuo Hua Temple has also been built in the cave area – where the mummified body was originally found.  As Matou Mountain is an area of untouched forest, flowers and wildlife, Zhidan County authorities have developed an association with Daoist practitioners so that this beautiful area may be opened to visitors.

这尊坐化像高0.85米，宽0.45米，坐在宽0.93米、长0.4米的石台上，从坐化像残损处可以看到真身泥塑的人骨基本完好，骨骼完整洁白，表面泥层中谷秆仍然黄亮而有韧性。为保护好这尊真身泥塑像，志丹县2005年成立了马头山道观遗址保护管理委员会，又邀请西安文物保护修复中心对其进行修复保护，并在遗址上新建了玄天上帝宫、真身坐化殿等5处建筑，还把坐化像从石窟请到新建的坐化殿。由于马头山是原始森林区，万木葱茏，野生动物品种繁多，志丹县结合道教旅游，开发了马头山森林公园旅游景区。
©opyright: Site design, layout & content Qianfeng Daoism (UK)  (2014).  No part of this site (or information contained herein) may be copied, reproduced, duplicated, or otherwise distributed without prior written permission from qianfengdaoismuk@f-m.fm