Realisation of Emptiness in the Wu Liu (伍柳) School of Daoism 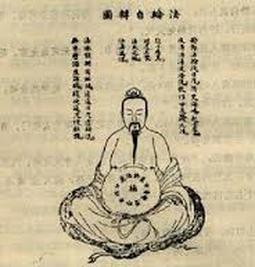 Translator’s Note:  What follows is a short introduction comprised of two extracts from different Chinese language texts that deal with the history and philosophy of the Wu Liu School.  The Wu Liu School is an integration of Longmen Daoism and Ch’an Buddhism.  Therefore the Wu Liu School is a sub-branch of the Longmen School.  Master Zhao Bichen – within Taoist Yoga – presents the Wu Liu teachings on ‘void’ verbatim.  The Wu Liu School is the theoretical basis of Zhao Bichen’s Qianfeng Daoism.  The Ch’an teaching of delusion, relative void and all-embracing void is used in the Wu Liu School and are correlated with the Daoist stages of realisation, with no distinction being made.  For Daoist practitioners from other lineages, this fact often seems odd or out of place.  However, if the human mind is a manifestation of the same genetic design the world over, and if it is true that enlightenment or immortality are ‘real’ states that are not ‘imagined’, then it logically follows that any claims to the realisation of an ‘ultimate’ or ‘pristine’ state of mind within different cultures as a culmination of distinct spiritual paths, must in reality be a discussion of exactly the same realised state.  If these states are ‘different’ then it logically follows that these states are either ‘false’ or only ‘temporary’ realisations mistaken as ‘permanent’.  If the latter is the case, then all paths that demand diligence, sacrifice and discipline are pointless as the results are purely imaginary.  The Qianfeng School demands that all its disciples participate in good quality Ch’an meditation to ‘calm’ and ‘still’ the mind before the next stage of Daoist cultivation can begin.  This is not an easy task.  I had to practice Ch’an meditation for 11 years (three as a monk) before Richard Hunn would allow me to move on to the next stage of Qianfeng training.
​ACW 26.3.2016 (GMT Ends)
​‘Seeing void as not empty is right and seeing the void as empty is wrong, for failure to return to the (tsu ch’iao) centre (which is not empty) prevents the light of vitality from manifesting.’

(Master Zhao Bichen – Taoist Yoga – Page 3)
The Wu Liu School was founded by Wu Shouyang (伍守阳) and Liu Huayang (柳华阳) during the end of the Ming Dynasty and the beginning of the Qing Dynasty.  The Wu Liu School specialises in ‘nei dan dan fa’ (内丹丹法) or the ‘law of internal energy centre self-cultivation’.  Both Wu Shouyang and Liu Huayang were from Yuzhang (豫章) area, which is today known as Nanchang (南昌).  At the end of the Ming Dynasty Wu Shouyang abandoned his Confucian studies and instead dedicated himself to the study of the Longmen (龙门) or ‘Dragon Gate’ Branch of the Quanzhen (全真) or ‘Complete Reality’ School of Daoist self-cultivation.  During this Daoist training, he also studied the Ch’an Buddhist method of meditation, and through this dual Daoist-Buddhist approach, he finally penetrated the profound essence of Dao (道) and realised complete enlightenment.  After coming out of the mountains, Wu Shouyang taught his ‘nei dan’ technique to Liu Huayang.  Wu Shouyang wrote the following manuals for Daoist self-cultivation entitled ‘天仙正理’ (Tian Xian Zheng Li) or ‘Divine Immortal Correct Principle’, and ‘仙佛合宗’ (Xian Fu He Zong) or ‘Immortal Buddha Unified Lineage’.  Liu Huayang wrote the following manuals of Daoist Self-cultivation entitled ‘金仙正论’ (Jin Xian Zheng Lun) or ‘Golden Immortal Virtue Treatise’, and ‘慧命经’ (Hui Ming Jing) or ‘Wisdom Life Classic’.  Later, these four books were gathered together to form what has become known as the ‘伍柳仙宗’ (Wu Liu Xian Zong) or ‘Wu Liu Immortal Lineage’.  This is because the central principle is clearly presented and logically explained.  As a consequence, the Wu Liu School has spread throughout the world.

The Wu Liu School is an integration of Longmen Daoist and Ch’an Buddhist meditative techniques that emphasise the efficient transmission of qi (气) energy through the energy channels (脉 – Mai) of the body, which is facilitated by the practice of refining the ‘小周天’ (Xiao Zhou Tian) or ‘small orbit’ (i.e. ‘microcosmic’) circulation method.  Buddhist practice assists this Daoist self-cultivation method through the practice of ‘禅定’ (Ch’an Ding) or ‘stilling the mind’ during seated meditation.  Stilling the mind is a prerequisite within the Wu Liu School which must be attained prior to the qi energy being transported freely through the energy channels and circulated effectively through the small orbit.  This is because there is a correlation between ‘stilling’ the thoughts in the mind and unblocking the qi energy channels in the body.  Within the Wu Liu School the former cannot be achieved without the accomplishing the latter, although it is acknowledged that the qi energy channels can be partially unblocked without necessarily ‘stilling’ the mind.  However, it is also acknowledged within the Wu Liu School that if the qi energy channels are only partially unblocked, (and seated meditation is not practised), then the state of immortality cannot be attained.  This is why the Wu Liu masters wrote detailed instructions about how Buddhist meditation and Daoist self-cultivation (nei dan) should be combined and correctly practised to avoid the risks associated with following incorrect pathways.

The Wu Liu School advocates that Daoist self-cultivation can only be achieved if the Dao is sought through ‘xu’ (虚) or ‘emptiness’ (in the mind).  Not only this, but in the advanced stages of practice, this ‘emptiness’ is penetrated with such a clarity of insight that the Dao is understood to be ‘xu kong’ (虚空) or ‘empty’ of ‘emptiness’ (because it is a void that contains all things).  Liu Huayang stated:

‘A brilliant shining orbit contains the entire Dharma-realm, the divine mind penetrates the void that is empty (of emptiness) and shines brightly: all integrates together like seawater in a deep pond and becomes crystal clear.’

The Wu Liu School teaches that emptiness is realised through disciplining and training the mind.  Once relative emptiness is realised, then a further stage of meditative training is required so that developed insight (and wisdom) penetrate the relative emptiness (that is empty and contains nothing) and realises the all-embracing void that contains all things.  This void is ‘empty’ of ‘emptiness’ and is only realisable through the mind.  This is because ‘无心’ (Wu Xin) or ‘no mind’ is the realised state of ‘虚空’ (Xu Kong) or ‘void empty of emptiness’.  The ‘xu kong’ state is the ‘noumenon’ (本体 – Ben Ji) or ‘absolute void’.  This is the state of ‘xian tian’ (先天) or the ‘pre-natal’ condition, which is ‘empty nothingness’ (虚无 – Xu Wu) and corresponds with pure yang (阳) and shen (神) or ‘empty spirit’.  This realised state of mind (and body) is empty in nature, all-embracing in practice, and contains the ten thousand things.  It is the true and all-pervasive Great Dao (大道).  This state is described by Liu Huayang as being one of:

‘No life – no death.  The clouds disperse to reveal the pure mountain:  No coming – no going.  Inherent wisdom manifests by solitarily ‘stilling’ the mind month after month.’

The key to the practice of the Wu Liu School is premised upon the understanding of two characters ‘寂静’ (Ji Jing) or ‘solitary stillness’.  Without this achievement, there is no correct method or realisation of the essence.  If the mind is not ‘stilled’ (and emptiness fully realised and penetrated) it does matter what method is used because it will not work.  The Dao is not ‘emptiness’ and not ‘non-emptiness’.  There will be no real entry into the Dao if training is only upon the body.