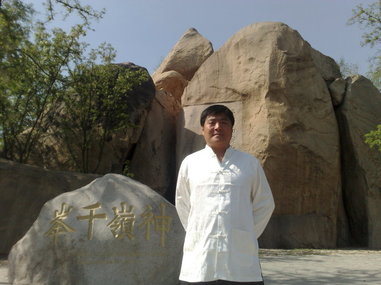 I first discussed this project over two years ago (in late 2013) with Dr Zhang Qingsong and Master Zhao.  Master Zhao’s blog has been active since at least 2008, but the blogging platform was unfamiliar to both myself and my editing staff when we first assessed the feasibility of carrying-out this project.  The blogging platform was not easy to generally access at the beginning, but with familiarity and the adaptation of methodology, we were soon able to devise a working model that allowed us at first to randomly access Master Zhao’s work, and then later to work chronologically backwards through his posts.  In ‘stage 1’ of the translation project no dates were affixed to the posts, but as the link to the original post was always included, it was thought that dedicated readers could find the date out for themselves.  It was also thought that as we were moving around the blog in a more or less haphazard manner to start, different dates affixed to the English translations might serve to confuse the general reader.  Stage 1 has now seen around 110 blog posts translated into English (as of the 28.12.15).  Obviously this does not yet include Master Zhao’s latest posts – which will be added in due course.  Stage 2 of the translation project will involve the affixing of dates to the English translations so that general readers can chronologically access the blog in descending order from newest down to oldest.  It may transpire that there are areas of Master Zhao’s blog that have not yet been accessed (for one reason or another) but should such material be discovered, it will be assessed for translation.  As a number of posts involve the continuous repeating of themes – such as the life of Zhao Bichen – not all have been translated to save time.  In such cases a typical version of such posts have been selected and translated.  Other areas of repetition involve the description of the Qianfeng theory, method and practice.  Again, after assessment, a version including all the information has been selected for translation.  The exception to this rule has involved Master Zhao re-telling important information (mentioned many times previously) and suddenly adding a ‘new’ fact of immense historical interest.  In such cases the text is included.  We think that despite the omission of repetition, we have managed to translate perhaps as much as 80% of the bulk of the posts.  As Master Zhao prefers face to face contact, many of his posts are about the success of this method.  Master Zhao is of the opinion that self-training is of a very limited use, and that if practitioners are serious about Qianfeng self-development, they must go to Beijing to personally train with him.  Indeed, despite well over a hundred blog-posts, Master Zhao only once specifically states that his great-grandfather’s manual (known in the West as ‘Taoist Yoga’) has any use in ‘self-training’, but even then it is with reservations.  The history of his great-grandfather – Zhao Bichen (1860-1942) – figures all the way through the blog and Master Zhao provides historical detail not available anywhere else outside of China.  The Taoist Yoga manual is mentioned numerous times as a depository of Qianfeng theory and knowledge, but is generally presented as being of limited use in China unless the practitioner has direct access to a qualified Qianfeng teacher.  On the other hand, Master Zhao is also very proud that his great-grandfather’s manual is known about and discussed in Western academic circles, as well as being popular amongst the general public in the West.  By writing his manual, Zhao Bichen broke with the ancient Chinese Daoist custom of secrecy and obscuration.  Obviously Master Zhao Ming Wang continues this new tradition of making what was once ‘hidden’ Daoist knowledge available to the world.  This is where the knowledge and wisdom of Qianfeng Daoism has intersected with the aims and directions of the International Wisdom Society the President of which – Dr Zhang Qingsong – has studied with Master Zhao.  Zhao Bichen’s manual must be respected and interpreted in the correct manner, so as to prevent misuse and misunderstandings.  This is why Master Zhao insists that knowledge and wisdom must a) be made available, and b) used in the correct manner.  Master Zhao, of course, lives in the People’s Republic of China, and a number of posts deal with the subject of governmental recognition and endorsement of the Qianfeng Prenatal School.  Equality between men and women is a fundamental attribute of Master Zhao’s approach, as is the fact that it is an important Qianfeng rule that Daoist instruction is always given free of monetary charge.  Master Zhao also has many Western students and he maintains an open door policy toward them at his home in Beijing – namely the Qianfeng Hermitage in Yangfang Town.  As with all ongoing translation projects, more work will be carried-out to aid clarity and cross-cultural communication.
©opyright: Site design, layout & content Qianfeng Daoism (UK)  (2014).  No part of this site (or information contained herein) may be copied, reproduced, duplicated, or otherwise distributed without prior written permission from qianfengdaoismuk@f-m.fm