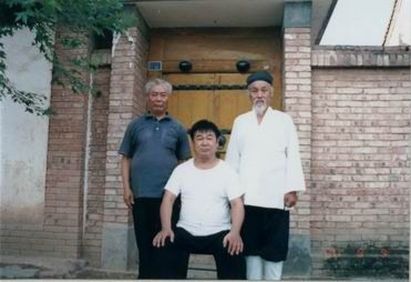 Translator’s Note:  This English translation is extracted from a much longer, and very well researched Chinese language blog article, about the developmental history of the Qianfeng School. The author makes clear that the Quanzhen, Namo School of Master Liu Mingrui and the Longmen School as practised by the Ch’an Buddhist Masters Liao Ran and Liao Kong (as well as the later Qianfeng School) – are linked through the teachings of Master Liu Huayang and are, therefore, all descended from the Wu Liu Branch of the Longmen tradition.  This is to state that Master Liu Huayang is the ‘root’ master of all these traditions, and that through him is the association of the Qianfeng School with the Quanzhen School and its Longmen developmental branch.  Master Liu Huayang was an inheritor of the Linji Ch'an School and the Longmen Daoist School of Wu Shouyang. What has to be remembered is that the Longmen School (Founded by Master Qiu Chang-Chun) was itself a development away from the traditional rigidity associated with the Quanzhen School.  The Longmen School advocated the integration of a Daoist core of medicalised and transformative self-cultivation (nei dan) - with that of Buddhism, Confucianism and other beliefs and practises. As a consequence, Master Liu Huayang developed the Wu Liu School of the Longmen tradition – which officially integrated Linji Ch’an Buddhist meditative practice with that of Longmen Daoist (nei dan) self-cultivation. The Wu Liu, Namo and Longmen Schools are considered to be distinct manifestations of an identical underlying philosophy, and are not viewed as ‘different’ within Chinese cultural thought (although the unique lineages are obviously acknowledged). This accommodating attitude made the Longmen School very popular amongst the people. The Wu Liu School is a manifestation of the pure Longmen tradition of 'integration with difference’, the essence of which has been preserved and developed through the practises of the modern Qianfeng School. As a consequence of this ‘inter-connectedness’ of lineage, the Qianfeng School can rightly associate itself with philosophical Daoism (the ‘Daojia’ founded by Laozi), as well as the Quanzhen, Longmen, Wu Liu and Namo Schools, with an emphasis on any ‘one’, ‘all’ or ‘none’, depending upon the attitudes and influences of the various masters concerned. This text puts great stock in the Namo teachings that Zhao Bichen received from Liu Mingrui – even though there does not seem to have been any formal transmission of lineage between the two men.  This fact does not invalidate the practical nature of Zhao Bichen’s experience in this school.  Zhao Bichen did receive formal transmission from the Ch’an Buddhist Master Liao Ran (this text also gives his Daoist name of these ‘Buddhist’ monks).  Liu Huayang was the 9th generation inheritor of the Longmen School, whilst Liao Ran and Liao Kong were both 10th generational inheritors of the Longmen School (Liu Mingrui is not specifically mentioned as a ‘Longmen’ inheritor and this may explain why he could not transmit this teaching to Zhao Bichen).  This is why Zhao Bichen is officially regarded as the 11th generational inheritor of the Longmen School.  None of this would have been possible without the influence and creative genius of Master Liu Huayang and his Wu Liu School.  ACW 1.4.2016

It is only through the practice of the correct traditional path of Daoism, that the true lineage can be inherited and passed on from one generation to the next.  Only if the origin is correct at the point of entry will the correct virtue be generated that will result in the attainment of Immortality.  The Quanzhen (全真), Longmen (龙门) tradition of Daoist self-cultivation is consider to be within the Northern Lineage of the Pure and Clean Method of Lower Energy Centre Self-cultivation (北宗清净丹法 – Bei Zong Qing Jing Dan Fa).  This is an open lineage that does not keep its transmission secret, and because of this policy of non-discrimination, it is considered a supreme pathway with no limitations.  In the past, the ancestors always strove to improve and modify their traditional approach to Daoist self-cultivation, and there was much beneficial innovation that was passed on.  In fact, constant improvement and the search for better and more efficient methods is the very basis of this lineage.  Tradition does not necessarily mean being stuck in the past with out-dated methods.  One point of practice that never changes, however, is the requirement for practitioners to behave in a morally upright fashion that generates virtue, for without virtue there can be no Immortality.  Only then will the Mysterious Gate (玄门 - Xuan Men) be found and entered so that the Secret Treasure (秘宝 – Mi Bao) can assist in climbing the Divine Ladder (天梯 – Tian Ti) to Immortality (仙 – Xian).   The Quanzhen, Longmen School was founded by Qiu Changchun (邱长春) who initiated the policy of open teaching.  He said that ‘the Longmen method is not restricted and its door is open for all to practice.’  As a consequence, he gathered a great number of disciples from many different backgrounds and was able to correctly convey the Daoist teachings under any circumstance.  This is why his lineage has endured and has never declined.  During the Ming and Qing Dynasties it was the great masters of the Quanzhen, Longmen School that taught countless beings and made endless improvements to the Daoist Method.  He said that the ‘Longmen School holds up one half of the divine sky – whilst the other half is held up by the Linji (临济) School of Ch’an Buddhism.’  The Sages said: that ‘They would rather follow the Longmen method rather than those snakes imitating the Dao.’

The Quanzhen, Qianfeng Pre-natal School (千峰先天派 – Qian Feng Xian Tian Pai) of Daoist self-cultivation, comprehensively inherited the complete lineage of the Quanzhen, Longmen tradition of Daoist self-cultivation.  The Qianfeng School inherited the true lineage of the Quanzhen, Namo School (南无派 – Na Mo Pai), whilst simultaneously integrating elements of Ch’an Buddhism and Confucianism, as well as ideas from other sects.  This was because the founder of the Qianfeng tradition – Zhao Bichen - spent many decades training in Daoist self-cultivation and visited over 30 different masters from varying traditions.  His behaviour is said to have exemplified the very heart of the true spirit of the Longmen tradition.  The ancient masters of the Longmen and Namo School practised authentic Daoism, whilst also taking note of Confucian teachings and that of Linji Ch’an Buddhism – this is the basis of the integration of the three main religions.  This is a unique development in China.  The Vice President of the China Daoist Association – Huang Xinyang (黄信阳) – stated that ‘The Qianfeng School is a complete and thorough inheritance of an authentic Daoist lineage that unites the ten thousands things, and whose influence has spread far and wide.’  The Qianfeng School is a self-contain, orthodox Daoist tradition that has adjusted its teachings in accordance with prevailing conditions without compromising its authenticity.

Liu Huayang (柳华阳) had the Daoist name of ‘Grand Endurance’ (太常 – Tai Chang) who was from Hongdu (洪都).  In his youth he was a Confucian scholar during the early Qing Dynasty, but abandoned this profession and become a Ch’an Buddhist monk in the Linji (临济) tradition.  Due to his sincere seeking of the Dao, he (spiritually) met the Ancestor Wu Chongxu (伍冲虚) who transmitted the complete and secret transmission of the Daoist Self-cultivation method.  He also trained with the Ch’an Buddhist Master Kun Yun (壸云) who unblocked his energy channels.  This is how Liu Huayang became recognised as the 9th generation inheritor of the Longmen School.  This is how the world gained a Buddhist – Daoist integrated school.  Later, Liu Huayang wrote the books entitled ‘Wisdom Life Classic’ (慧命经 – Hui Ming Jing) and the ‘Golden Immortal Principle Treatise’ (金仙证论 – Jin Xian Zheng Lun).

Liao Ran (了然), his Daoist name was ‘Pure Meditation’ (清禅 - Qing Ch'an), was an eminent Ch’an monk of the Linji tradition.  During the reign of the Qing Emperor Qianlong (1735-1796), Liao Ran inherited the complete Daoist method and lineage from Liu Huayang.  This is how Liao Ran became recognised as the 10th generation inheritor of the Longmen School.

Liao Kong (了空) had the Daoist name of ‘Pure Stillness’ (清静 – Qing Jing).  He was an eminent Ch’an Buddhist monk of the Linji tradition.  In the 4th year of the reign of the Qing Dynasty Emperor Jiaqing (1799), Liao Kong was the Head Monk of the ‘Benevolent Longevity Temple’ (仁寿寺 – Ren Shou Si) in Beijing.  At this time, Liao Kong inherited the complete Daoist method and lineage from Liu Huayang.  This is how Liao Kong became recognised as the 10th generation inheritor of the Longmen School.  After this, Liao Kong travelled to the Guazhou area of Jiangsu province, where he practised with his elder Buddhist and Daoist brother – Master Liao Ran – at the ‘Golden Mountain Temple’ (金山寺 – Jin Shan Si).

Zhao Bichen (赵避尘) had the Daoist name of ‘Number One Son’ (一子 – Yi Zi) or possibly ‘Unified Master’.  He was from the Changping area of Beijing.  When young, he practised the Dao of martial arts.  In the 21st year of the reign of Qing Emperor Guangxu (1895) at the Golden Mountain Temple (金山寺 – Jin Shan Si) he paid his respects to Ch’an Buddhist Masters Liao Ran (了然) and Liao Kong (了空).  After two decades the Grand Master Liao Kong formally transmitted the Daoist self-cultivation lineage to Zhao Bichen and granted the ‘divine mandate’ for him to teach the secret and profound teachings to others.  This is how Zhao Bichen became the 11th generation inheritor of the Quanzhen, Longmen School.  However, as well as being taught by Liao Ran and Liao Kong, Zhao Bichen also received instruction from Liu Mingrui, Wu Chan (悟蟾) and Tan Laisheng (谭来生) and over 30 other masters.  These teachers included Buddhists, Daoists and Confucians, which explains why the Qianfeng tradition is a blend of all these lineages.  He was assisted in his writing of Daoist manuals by his learned elder brother Zhao Kuiyi (赵魁一).  Through Liu Huayang (of the Wu Liu School) – the Qianfeng School is recognised as a true descendent of the Longmen lineage.