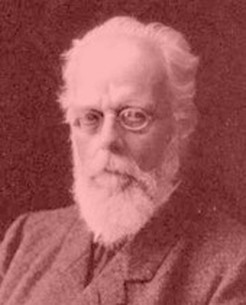 August Weismann (1834-1915) was a scientific genius born in Germany who specialised in evolutionary biology.  He carried-out an experiment whereby he removed the tails of mice and then bred them over many generations and observed that not a single mouse in any generation was born without a tail.  This proved that changes in the body caused by environment are not passed-on from one generation to the next.  His work proved that ‘somatic’ or ‘body’ cells are separate from sex cells or ‘germ cells’.  It is sexual cells that are passed on from generation to generation, whilst the body cells atrophy and die.  However, Weismann saw no obvious scientific reason why body cells should die at all.  In their ideal state, body cells should operate through endless cycles of growth, decay and re-growth without interruption, enabling a potentially limitless lifespan.  This observation led Weismann to question why people died at a time when most philosophers and biologist took death for granted, and he formulated an ingenious response.  Weismann stated that mortality in individuals was not a primary necessity but that it had been secondarily acquired as an evolutionary adaption.  How can ‘dying’ have a beneficial effect for the human species?  It appears that the immortal sex cells use the mortal physical body as a vehicle for propagation from one generation to the next, and that in so doing, it is important that these vehicles fall away so that ‘new’ combinations of sex cells are achieved through reproduction.  Weismann further states that living forever would be a luxury that benefits the physical body, but which does not confer any evolutionary advantage on the sex cells – therefore physical immortality, although possible for all human beings, was ‘deselected’ through the process of natural selection.  What is interesting is that Chinese Daoism – as a natural science – has acknowledged for thousands of years what Weismann understood through his modern scientific studies.  Furthermore, it would appear that through training in Daoism, or by naturally producing a similar lifestyle (i.e. artificial selection) such as in the case of the British Thomas Parr (1483-1635), the evolutionary necessity for the human body to ‘die’ can be slowed down and delayed considerably – hence explaining why many Daoist practitioners live very long lives, as do those who live close to nature.