The Daoist Concept of '精' (jing1) – a Scientific Analysis 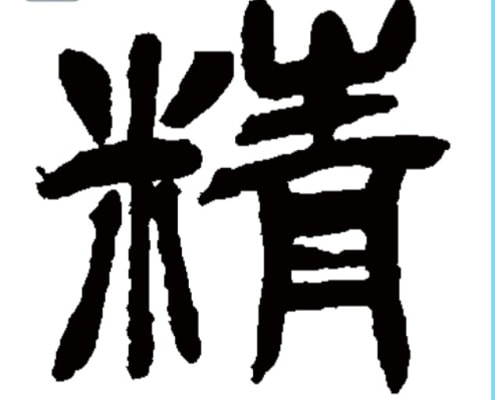 The Chinese ideogram ‘精’ (jing1) dates back to the Seal Characters standardised during the Qin Dynasty (221-206 BCE) and the Han Dynasties (206 BCE-220 CE) – Chinese ideograms which evolved from earlier Zhou Dynasty developments in writing. As matters stand today, there are no known Bronze or Oracle versions of this ideogram. This suggests that this term was either a) invented during the Qin or Han (corresponding with developments in philosophy and spirituality), or derived from an earlier Zhou Dynasty or Shang Dynasty ‘root’ ideogram now lost. Within the modern pinyin system of Mainland China, this ideogram is categorised as ‘jing1’.

The left-hand (semantic) particle is ‘米’ (mi3) – an ideogram that dates back to the Oracle Bone Script (c. 1200 BCE), and which literally translates as ‘rice’. More specifically, ‘米’ presents the image of still husked or uncooked rice. This is a rice plant with the dots representing the kernels of rice.

The righthand (phonetic) particle is ‘青’ (qing1), which dates back to the Bronze Characters of the early Western Zhou Dynasty (c. 1134 BCE). This ideogram carries the meanings of the vigour of ‘youth’ and the colours ‘blue-green’.

This particle carries the bottom element of ‘月’ (yue4) which usually stands for ‘moon’, but not in this instance. This is because ‘月’ (yue4) has evolved from the particle ‘丹’ (dan1), which dates back to the Oracle Characters, and is not historically related to the ideogram for ‘moon’. Earlier versions of this character are written as ‘𠂁’ and ‘𠁿’ and refer to a psychological and physical centre for refining ‘mercury’ (the ‘yin’ energy) such as happens in the area two inches beneath the naval (the furnace or crucible within which all transformation occurs). As this ‘Daoist’ training generates a yellow-reddish light perceived with the inner eye, it is often symbolically related with extracting ‘mercury’ (a refined ‘yin’) from ‘cinnabar’ – a non-refined ‘yin’ energy (within the context of external Daoist training) – but the exact definition depends upon the Daoist School concerned (within the Qianfeng School the term ‘mercury’ can be related to ‘神’ [shen2] and the realisation of an expansive and empty state of conscious awareness – which includes all phenomena (without contradiction). However, prior to this advanced accomplishment, it is recognised that as an individual gets older, invariably highly negative and disease-causing yin energy builds-up within the body organs, and through effective Daoist training, this deficient energy is uprooted, transformed and expelled. This particle is related to ‘井’ (jing3) (also expressed as ‘丼’) which dates back to the Bronze characters and represents a ‘well’. In ancient times a well was dug in the centre of the village and never changed position. This central positioning sustained all life (through the providing of water).

The upper particle of ‘青’ derives from the element ‘生’ (sheng1) which dates back to the Oracle Characters, and which conveys the meaning of the sprouting of life (as if from a root in the ground). As such, it is related to ‘屮’ (che4) which means growing ‘grass’, and ‘土’ (tu3) which refers to the earth, the ground or potter’s clay. All life springs from the ground (i.e. from a firm foundation) when it is nourished correctly. Taken as an entire concept, the ideogram ‘精’ (jing1) carries the meaning of polished rice, essential nature, essential energy, essential spirit, essential vigour, seminal fluid, semen, concentrated essence, refinement, pure essence, clear, bright and profound.

From an objective scientific perspective, does ‘精’ (jing1) exist? The answer is complicated. My own experience of circulating ‘jing’ is that it is a combination of a muscular ripple (traversing from the anus, up the spinal column to the top of the head, down the front of the face [to the upper palate], [and via the tongue] down through the lower palate, descending into the centre of the torso and entering the lower dantian [丹1田2] and into the groin area where it then travels back up the spine repeating the cycle), deep breathing (‘氣’ – qi4) and an exact conscious awareness of the entire process. It is not an invention of idealism because a thought in the head is not mistaken as ‘existing’ in the material environment. Jing is rather a combination of intense concentration, advanced relaxation, aligned (skeletal) posture, and the generation and harvesting of an enhanced presence of nourishing and enriching bio-chemical energy (which floods the abdomen and invigorates the sexual organs before spreading throughout every cell of the body). All these physical processes (together with the conscious mind that observes and directs the developmental process), are collectively referred to as ‘精’ (jing1) within traditional Chinese Daoist culture and ancient medical knowledge. Modern science does not recognise this collective term, but it does recognise every constituent part of the process which comprises this Daoist developmental technique. Modern science does not ascribe the collective importance to these processes that the ancient Daoist Schools have declared, but neither does modern science deny the importance (for health) that these processes ensure. Certainly, if these processes are hindered or become deficient, the life expectancy of the individual is threatened. Jing is generated when the conscious mind focuses correctly upon the biological and chemical processes of the body. Jing is the physical processes integrated with conscious awareness. By strengthening the mind through meditation (and ‘stilling’ the thought process), conscious awareness becomes far more attentive and able to ‘penetrate’ the reality of physical existence. When coupled with disciplined bodily functions and movements (including seated meditation), jing is a) generated and b) enhanced. Does jing exist prior to this highly concentrated exercise? Yes, as the mind and body already enjoy a general relationship, with biological and chemical processes generating semen (in men) and ovum and menstruation (in women) together with a general healthiness. However, lifestyle, circumstances, environment and general living conditions can diminish this balanced functionality of mind and body, as well as enhance its presence. The point is that without training within Daoist methodology and philosophy, the presence of jing remains virtually unknown.

Daoist science is remarkably robust and is a very sophisticated development in the ancient understanding of human anatomy and physiology. Of course, being an original or innovative evolutionary development in human scientific understanding, Daoist science does not follow the methodology of modern science in its traditional analysis of reality. Conscious awareness, for instance, does not manifest as being separate from the biological processes of the body that it perceives, controls and develops. Therefore, from a logical perspective, '精' (jing1) exists as a combination of psychological and physical processes acknowledged as representing a definite and specific ‘life giving’ and ‘life sustaining’ functionality. '精' (jing1) exists as a combination of ‘existing’ psychological and physical (biological) processes and cannot be dismissed as being a product of imagination or a false assessment of reality. Daoist science is distinct from Daoist religiosity and should not be conflated with the ideas of spirits, gods, magic and other elements of early human attempts to understand their environment. This is not to suggest that Daoist religiosity is completely divorced from Daoist science, but rather acknowledges the fact that just as modern science evolved out of older forms of religiosity in the West, exactly the same process has occurred within ancient China. The main difference is that the ancient Chinese thinkers did not feel the need to completely break with formal religion when they developed their versions of (secular) science. Within the context of modern China, science is the preferred vehicle for the development and progression of humanity. Religion is viewed as a private matter (fully supported by the State), which through extensive and heightened programmes of nationwide education, has evolved to support scientific endeavour and not stand in antagonism to it. In the final analysis, '精' (jing1) generates life (semen-ovum), sustains life (breathing, eating, drinking and exercise), and develops the vigour of life (through Daoist self-cultivation).