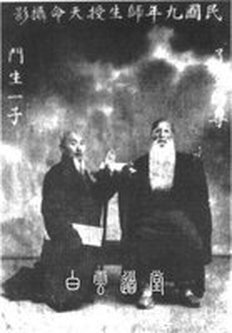 Zhao Bichen & Grand Master Liao Kong
For thousands of years many people in China have been observing the cycles and rhythms of the body and mind, and based upon the data gathered through those observations, have developed a collection of exercises designed to develop the psycho-physical energy centres known to exist.  These exercises are known as ‘external cultivated-energy’ (外丹 – Wai Dan) and ‘internal cultivated-energy’ (內丹 – Nei Dan) techniques.  One branch of this philosophical Daoist development can be found in the self-cultivation exercises of the neidan method known as ‘building health and refining mind and body’ (性命双修 - Xing Ming Shuang Xu), which serve as an exact Daoist law that must be correctly followed if it is to be effective.

It is important to understand that Chinese Daoism is a science that has existed for thousands of years, and which has been passed from one generation to the next without exception.  The ‘building health and refining mind and body’ (xingming shuangxu) technique was not designed to be kept secret and used by a select few, but is rather intended for the use of the entire world.  My great grandfather – Zhao Bichen (1860-1942) – was the 11th generation inheritor of the Dragon Gate (longmen) School of Daoism, and through his ingenuity the above technique was developed and refined.  The vehicle he developed for transmitting the above teaching is the Qianfeng (thousand peaks) Xiantian (prenatal) School of Daoism. In his formative years he trained with at least 36 different masters before being accepted as a disciple of Masters Liao Ran (了然) and Liao Kong (了空) – who were recognised as the 10th generation descendants of the Dragon Gate School.  From these two masters Zhao Bichen correctly learned all the Daoist law, and he recorded his findings in a book entitled ‘The Secret Cultivation of Essential Nature and Eternal Life’ (Xingming fajue mingzhi), which he subsequently passed on to the world.

Zhao Bichen (赵避尘) was also known as Zhao Jindiao (赵金鵰) and Zhao Shunyi (赵顺一), and his Daoist name was ‘Yi Zi’ (一子).  He was the founding patriarch of the Qianfeng School.  He was born in the 10th year of the reign of Qing Emperor Xianfeng (1860), in Yang Feng Town, which is situated in the Changping County of northwest Beijing.  His father was called Zhao Yongkuan (赵永宽), and his birth-mother was called Meng Shengzhen (孟生贞).  The Zhao family had three sons, the eldest of whom was called ‘Xing Yi’ (兴一), the next eldest was called ‘Kui Yi’ (魁一), and the youngest was called ‘Shun Yi’ (顺一) [i.e. Zhao Bichen].  From an early age, Zhao Bichen trained under the guidance of his uncle who was named ‘Zhao Yongsheng’ (赵永升), and was treated like a son.

At that time, the Zhao family were very poor and lacked influence in the world, and so Zhao Bichen could only attend three years of free schooling in the winter. In the first year of the reign of Qing Emperor Guangxu (1875), Zhao Bichen suffered from blood in his stools (i.e. very bad diarrhea).  His grandmother took him from Yang Feng Town to 10 (Chinese) miles southwest of Qianfeng Mountain, where the ‘Peach Garden Temple’ (桃园观 – Tao Yuan Guan) resides (which is also known as ‘Quiet Corner Temple’ - 旮旯庵-Ga La Na).  There, they requested entry to the temple to receive treatment from the renowned Daoist master called Liu Mingrui (刘名瑞).  Liu was the lineage inheritor of Tan Chu Duan (谭处端), a master in the Namo School (南无派 – Na Mo Pai), as well as being the disciple of Liu Huayang (柳华阳).  Thanks to Master Liu’s knowledge of the Dao, Zhao Bichen fully recovered, and as a result, Liu granted Zhao the Daoist name of ‘Great Enlightenment’ (大悟 – Da Wu), and since that day, there was genuine affection between the two on the path of the Dao.

Zhao Bichen learned the law of energy centred self-cultivation (丹法 – Dan Fa) from Master Liu Yunpu (刘云普), together with martial arts, and once served as a bodyguard on a journey from Beijing to Ulan Bator in Mongolia.  Around the beginning of the 16th year of the reign of the Qing Dynasty of Emperor Guangxu (1890), Zhao Bichen became a salt-tax official for the government.  His general area of tax-collecting activity was along the route of the Beijing-Hangzhou canal.  At this time, Zhao Bichen started to seek-out experts in Daoist self-cultivation, and learn from their instruction.  This is how he acquired authentic knowledge and instruction in the art of Chinese health and longevity exercises.

These are the name of many of the masters that Zhao Bichen learned from at this time, there was Wu Chan (悟蟾), Zhu Baoxiang (朱宝祥), Guang Siye (广四爷), Peng Maochang (彭茂昌), Tan Zhiming (谭至明), Zhang Maode (张懋德) and many others of high Daoist attainment.  In the 21st year of the reign of Emperor Guangxu (1895), on the 13th day of the 3rd lunar month, Zhao Bichen sought refuge from the world of dust, and one day followed the waterway to Huai’an (in Jiangsu province) and entered the Ch’an  Buddhist Golden Mountain Temple (金山寺 – Jin Shan Si), situated there.  This is where he met and studied with the two Ch’an masters named Liao Ran (了然) and Liao Kong (了空), who were also Daoist masters of the Wu Liu (伍柳) School.  At this Ch’an Buddhist temple, Zhao Bichen trained diligently and was taught without exception, the entire path of the Wu Liu Daoist School.

In the 22nd year of the Republic of China (1933), Zhao Bichen compiled his manual of Daoist self-cultivation entitled ‘The Secret Cultivation of Essential Nature and Eternal Life’ (性命法訣明旨 – Xing Ming Fa Jue Ming Zhi), and its printing and publication was funded by the latter Qing Dynasty Beijing Opera performance artists Guo Xianglin (果湘林) and his wife Madam Yu Suxia (余素霞).  This book has become an enduring masterpiece, within which Zhao Bichen explains the complex Daoist path of self-cultivation in a clear and concise language that is accessible to all readers.  He carefully describes the entire neidan path, and minutely explains every facet of the journey.  What is of particular note, is that Zhao Bichen devised a 16 step approach – with each ‘step’ forming a complete chapter in the book, which also includes extensive anatomical diagrams.  This clarity and organisation has been appreciated and made use of by many scholars and researchers who have studied and valued this book long after the passing of Zhao Bichen.  In fact, Zhao Bichen and his late Qing Dynasty disciple named Dr Li Shirong (李士荣), experimented with each chapter, putting the instructions into practice, and recording their observations, findings and results in a scientific manner.  Once all the instructions were verified as being physically and psychologically correct, Guo Xianglin drew the instructional diagrams following precise guidelines.  This development was very important and ground-breaking, because it was the first time in history that modern (Western) science in the form of anatomy and physiology was used to explain traditional Chinese Daoist self-cultivation techniques.

Sometime between the years 1928 to 1931 of the Republic of China, the old venerable Xinhai Revolutionary named Zhu Ziqiao (朱子桥), applied to the then Central Government, recommending that the founder of the Qianfeng School – Zhao Bichen – should be officially awarded a ‘Teacher in Health and Longevity Science’ (传授卫生性理学 – Chuan Shou Wei Sheng Xing Li Xue) certificate.  Now it is common academic knowledge that Zhao Bichen – the founder of the Qianfeng School – openly taught everyone without any regard to social class, rank, or status – because as far as he was concerned, all people were equal.  This approach has led to everyone being taught over-time, from high officials and dignitaries, down to the most humblest of people – no one has been turned away.  In fact, at least 42 of these individuals received full Daoist lineage transmission within the Qianfeng School, whilst being given permission to teach others in their own right.

During the 29th year of the Republic of China (1940), Zhao Bichen withdrew from the world and prepared his mind and body for transformation.  In 1942, he transcended the body whilst sat upright in the crossed-legged meditation posture.  Zhao Bichen spent more than 60 years engaged in Daoist self-cultivation.  In that time, he travelled the length and breadth of China (and suffered many hardships) whilst searching for highly qualified masters who possessed authentic Daoist knowledge.  In that time he trained with around 36 masters representing various Daoist paths.  In the end he realised Immortality, and because of this realisation, he was able to extensively teach others in a scientific manner and further the understanding of authentic Daoism not only in China, but also throughout the modern world.

赵避尘之重孙-赵明旺
©opyright: Site design, layout & content Qianfeng Daoism (UK)  (2014).  No part of this site (or information contained herein) may be copied, reproduced, duplicated, or otherwise distributed without prior written permission from qianfengdaoismuk@f-m.fm